My Journey With Food Waste & Happiness: One Woman's Vision (part 1 of 2)

I’ve always felt sustainability was important but I had never actively pursued it, until now. It wasn’t until I moved to Arizona that I really started to see the importance of sustainability. Water is a precious resource everywhere, but in Arizona you can physically see and feel its impact. This is what initially sparked my interest in sustainability and what ultimately led me to pursue a Master’s in Sustainability Solutions at Arizona State University. Upon starting my degree, I didn’t know much about food waste and the impact it was having on the world. 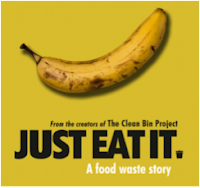 It wasn’t until I watched the movie, “Just Eat It: A food waste story” that I began to understand food waste. In this movie, a couple challenges themselves to live off discarded food for six months. They thought this would be difficult to do, however,  that was not the case. In fact, they often found they had more food than they could store in their house. This documentary opened my eyes to the sheer volume of edible food that is being discarded in North America.

Over the past several months, I began a journey with food waste and happiness that has brought me to where I am today. I set out to ultimately understand why food is wasted and what can be done to stop it. In the United States, it is estimated that around 40% of edible food is wasted (Gunders, 2012). That equates to around 30 million tons or 180 pounds of edible food wasted per person each year (EPA, 2016). With food insecurity running rampant in the U.S., this figure is horrifying. As I began to learn more about food waste in the US and the issues causing it, I wondered if other countries were experiencing the same problem.  In order to find out, I participated in a six week study abroad program where I traveled throughout Denmark and the United Kingdom. During my travels, I interviewed individuals from all walks of life in order to better understand their perspective of food waste and what their country was doing to prevent it.

There was one interview that really impacted my perspective of food waste and how it relates to happiness.  This interview took place in Aarhus, Denmark with Annbritt Jørgensen, the founder of Skraldecafeen. This translates to the Garbage Café’. Going into the interview, I didn’t know what to expect or exactly what the Garbage Café’ was. So the The first question I asked was for Annbritt to tell me a little about the organization and how it was started. She replied that it started off as a good idea. She had been learning about dumpster diving in Denmark and the sub culture around it. Dumpster diving is legal in Denmark, although some stores lock their bins so divers cannot access them. Although it is less socially accepted among the upper classes and it is a relatively common practice within certain populations (such as college students). Some people sustain themselves solely on dumpster diving. This inspired Annbritt to take the food that was in the dumpster and to use it as a tool to bring people together. Her organization sets up mobile kitchens in parks around Aarhus and invites everyone people to come and cook food that was harvested by her and her team harvested from the dumpster. This food is clean and fit for human consumption. Typically, the food is thrown out due to low aesthetic standards or older expired date labels.

The Garbage Café’ is doing a great job combating food waste in Aarhus by taking thrown away food and turning it into a resource, however, the food is not the focus of the organization. Rather, the food is used as a tool to create a gathering place where everyone is equal. Annbritt proudly stated that “it doesn’t matter if you are homeless or the mayor, everyone participates on equal terms.” She said that when they first set the kitchen up, the homeless population weren’t was not used to being invited to participate in the community things. Annbritt is proud that instead of the homeless of Aarhus being looked down on upon, they are were able to come to the Garbage Café’ and join as equals terms with everyone else. Annbritt’s perspective was so unique. She saw a problem with food waste in her city and acted on it. Her solution not only feeds people, but it also brings happiness and social inclusion to a stigmatized population.

My interview with Anntbritt got me thinking about ways which combating food waste could benefit people and increase their happiness. I found that not only can reducing food waste save money, but it can also reconnect a person with food and nature. There’s a disconnect with our food system that exists today. This has led to a disassociation between food and the natural environment. It is as if some people have forgotten that french fries are grown in the ground soil and that milk comes from a living animal cow. All areas of the food system requires large quantities of resources in order to grow and maintain them. When food is wasted, all of the resources that went into growing, processing and transporting that food are also wasted.

This is really evident in “The Extraordinary Life and Times of a Strawberry” video (watch it here https://youtu.be/WREXBUZBrS8) created by the Ad Council to fight food waste. In this video, you watch the strawberry grow, travel through processing, then travel again to the store. At the store the strawberry is purchased and taken home. It then sits in the fridge until it rots and is eventually thrown away. This story is tragic and unfortunately common.

Preventing food waste is easy; it’s just a matter of being proactive. I have a few strategies that I use regularly which have just about eliminated food waste in my home. In the past, much of my food waste came from over buying products at the grocery store. I would impulse shop and inevitably buy more food than I could eat. I began making lists of the items that I needed before going to the store. This has greatly reduced my impulse buying. I’m a vegetarian, so I eat a lot of fruits and vegetables. This can be difficult at times, because I only go to the store once a week and the shelf life of some produce items can be very short. Storing produce properly can double the life of it. Certain types of fruits, such as avocado sand watermelons, should be stored on the counter before they are ready to be eaten. Fruits like grapes and strawberries should be stored in the fridge. Storing produce correctly will keep it lasting longer so you have more time to eat it. Another great strategy I have found is to always keep items that need to be eaten first (like leftovers) towards the front of the fridge. This way, they are the first thing you see when opening the door so you are reminded to eat them. On those occasions when I have a few veggies vegetables in my refrigerator that are getting old, I have found that you I can make chili out of just about anything and it tastes good. All you I need to do is throw everything in a pot, add plenty of seasoning, and cook it until its tender. These are just a few strategies I use to reduce food waste at home, but there are plenty more ways.

The more I reduced my food waste, the greater benefits I experienced. Not only did it save me money, but it also pushed me to try new foods that I wouldn’t have tried otherwise. Any leftover scraps I have from cooking go into the compost bin, which I eventually use in my garden. Living more sustainably and reducing my food waste has made me more conscious of my actions and decisions. This has increased my happiness and brought me closer to nature.

Gunders, D. (2012, August). Wasted: How America Is Losing Up to 40 Percent of Its Food From Farm to Fork to Landfill. Retrieved March 2016, from Natural Resources Defense Council: https://www.nrdc.org/food/files/wasted-food-ip.pdf
Posted by Happiness Alliance at 2:34 PM