GN-what? A few words on a first encounter with Gross National Happiness

It was by pure coincidence that an accidental and remarkable occurrence of events and exchange of ideas that the concept of GNH was presented to me.

GNP measures the economic conditions of a country. We use it under the assumption that a 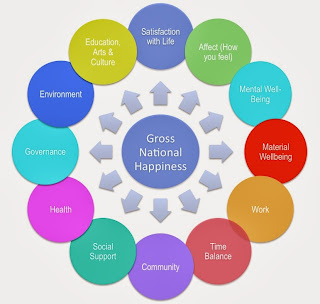 higher GNP leads to a higher quality of living, all other things being equal. GNP does not measure qualitative improvement in quality of life, such as whether you have more leisure time or are feeling less stressed and happier. It measures all quantitative increases in goods and services, ranging from increases in productivity due to innovation or efficiency to costs of crime and toxic spill clean-ups. It considers all to be good forms of economic growth.

On the contrary, with Gross National Happiness or GNH elements that are counted are subject to quantitative measurement. GNH is a subjective expression of well being within a country For example, increased volunteerism counts as a positive measure. Thus, GNH transforms the subjective expression of a large number of people into meaningful data. It includes measures from questions like “are you able to pay your bills” and “how satisfied are you with your job.”

GNH is motivated by the notion that the subjective measures like happiness are as relevant and important as objective measure like consumption. After analyzing both concepts I embrace the idea of collaborate with the Gross National Happiness initiative lead by Laura Musikanski. I hope it to be a journey of philosophical enhancement. in the pursue of happiness and social equality.

About the author:
Ivan Ibarra was born in Barquisimeto, the second largest city of Venezuela. He studied at Universidad Central de Venezuela and Universidad Santa Maria earning his undergraduate degree in Economics. He taught at junior colleges in Venezuela until he was granted a scholarship by the Gran Mariscal de Ayacucho Foundation to Study English at Seattle Pacific University in Seattle, Washington.
He immigrated to the United States in 1984 for political and economic reasons. From then on,  his career focused on restaurant business ventures in San Diego, Los Angeles, San Francisco and Seattle. His latest venture was Tape Unlimited LLC, a wholesale distributor of a wide range of adhesive tapes.

He has  volunteered for Survivors International, an organization based in Berkley, California. Ivan has a passion for the sport of Judo and holds a Black belt degree.
Posted by Happiness Alliance at 4:53 PM