Blissing out - or not. The Keynote at the Happiness Conference 2012 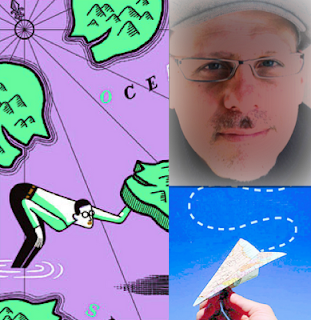 I have not read the Geography of Bliss. I know I should, and I want to, but the truth is I have not. I have heard a lot about Eric Weiner. He loves to travel. He is a grump. This is what he says about himself. He ran away from home when he was a kid.  He never stopped running. He says he is running to "a new way of seeing things."

Eric started his talk with a question:

He answered the question himself: Place matters.

He urged us to eavesdrop on cell phone calls. He told us we would hear one question:

So what is place?  Topography:  Earlier in the day Judith Lipton gave a talk at the Happiness Conference in Seattle explaining why Costa Rica consistently rated so happy. Geography was one: no natural disasters, no man-made disasters. Too gold poor for Columbus, Too far from the Incas and Mayans.

He labeled himself "unhappy" and  talked about his own personal journey of dealing with depression.  He was funny. I have found depressed people often can be so funny.  He found relief in travel. He found a way to travel his whole life.  How? Researching the countries that rated themselves as happy.  He went to happy places.  His travels followed scientific findings (namely, Gallup Healthways Poll among others): Sub-Sahara Africa and Former Russian colonies are the lease happy countries. Its hard to meet basic needs.  East Asia is next up on the latter - not too happy. They think of happiness in a communal sense- we, not me. Latino countries are second happiest in the world. The happiest countries in the world are Northern European.

Some facts from Eric:

Extraverts, Optimist, Married, Republicans, Religious Followers, College Degrees (but no advanced degrees), or  People with active sex life - these people are happier than Introverts, Pessimists, Unmarried, Democrats, Agnostics, People not college educated, People without an active sex life....
But, Eric cautions, be careful about causation.  The grumpy person will not necessarily be happier when married.

That is one of the purposes of the Happiness Initiative. This is why we use the 10 domains of happiness.  There is room for improvement in our communications (there always is), but we are defining happiness giving people more tools to understand and talk about it.

Posted by Happiness Alliance at 2:12 PM