Seattle may not be a happy place to live: Social justice, inequity and happiness

This week marks the end of a year long project to understand social justice in Seattle. This project is important because it is one of the first that tells us in real numbers what social justice - or injustice is. It gives us a comprehensive way to measure equity - and inequity,  It makes it clear that Seattle may be a happy city for some, but may not be such a great place to live if you are not wealthy or privileged with access to resources.


The goal of the project is greater social justice and well-being for all in our city.

We worked with  the Oromo, Somali and Filipino community centers as well as the Vietnamese Friendship Association. We analyzed the results in comparison to a random sampling of the entire nation.  The community-based organizations conducted small projects to increase the well-being of their community.

Below is the analysis for each community followed by a description of their project.  In subsequent posts, we will explore this valuable and groundbreaking work. 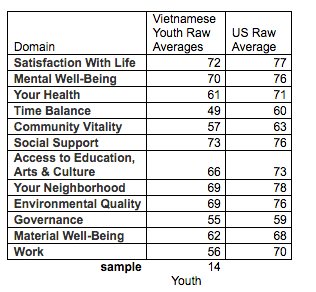 The Youth Council analyzed the results on their own after conducting the survey. They were concerned about their overall low scores, and particularly the ones for material well-being, as many youth are making decisions about further education and choice of work.   However, they decided that a sense of community and trust in governance were the key domains for increasing overall well-being for themselves, other Vietnamese youth, others in the Vietnamese community (non-youth!) and the neighborhood.  Through discussion, the youth council determined that the optimal way to leverage the resources they had to address the low scores was to hold a “Spring-Off.”  They invited local police officers and the community.  Everybody learned how to make spring rolls, sat together to eat them! Contestants for a spring eating contest were chosen by raffle and three Vietnamese youth beat out the competition including two police officers. For a little over an hour, 10-30 youth and a few elders sat at five different tables to ask officers prepared and spontaneous questions.    Approximately 200 people attended the event, with about 10 police officers joined by Seattle City Council member Mike O’Brian.
Below is the announcement, poster and some photos from the event.

VFA'S Youth Leadership Council is welcoming everyone from the community to join us for our first annual Spring Off event!

We'll be spending an afternoon learning how to make traditional Vietnamese Spring rolls, competing for fabulous prizes, meeting new people, and getting to know our local police officers and firemen with an open Q&A session! This event is completely FREE so come and bring your friends! 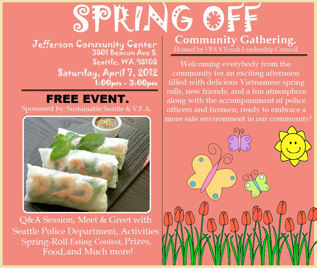 Vietnames Youth and others learning how to make spring rolls. “It's not that easy, and many of our youth do not know how to do this!” said James Hong, Director of Youth and Community Engagement for the Vietnamese Friendship Association. 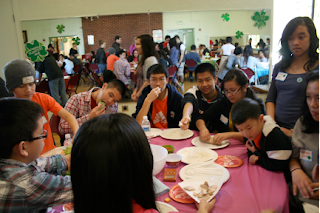 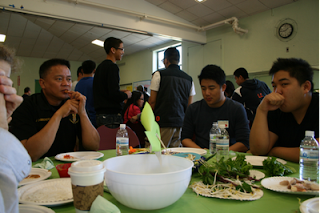 Seattle University Students sitting down with a local police officer. 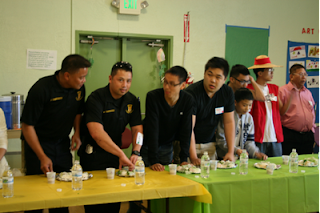 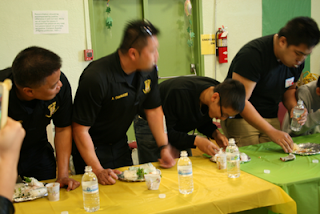 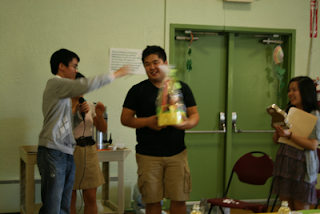 You got it! Youth triumph! 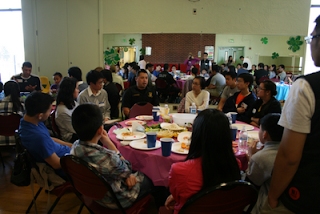 Youth and officers in discussion to build trust in government. 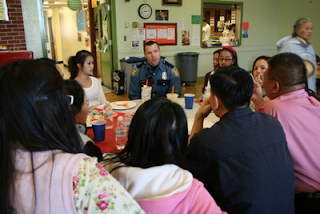 James Hong, Director of Youth and Community Engagement for the Vietnamese Friendship Association (VFA), said about “The project was wonderful in the context of working with our youth council. It gave them the opportunity to get them involved at every level, which is rare. They were able to conduct the survey, reflect upon the results, decide on a project and then coordinate it all themselves. We want to continue using this model for youth council. There was so much learning and it was all very valuable.”
He said the VFA was very pleased with all aspects of the project as the survey gave youth a strong platform for personal discovery and development and the event provided a way for youth, other community members and police officers to understand each other, and for the Vietnamese community to bond.  The Happiness Initiative (HI) is making a you-tube video of the event and has submitted proposals to write articles to magazines and national blogs.  A flickr account shows many photos from this event.

These survey results are the averages for 45 individuals from the Somali Community.  They are not a representative sample; so do not scientifically represent the community.  They may indicate the true feelings about Somali people in the community, however. It is up to the community to determine if a project as per our agreement should be undertaken.

The Somali community spent a great deal of time taking the survey. As most people do not have internet access, community leaders and volunteers sat down individually with people to take the survey. The community leaders analyzed the results, which are quite low overall. They decided to hold an event celebrating their culture and sharing the information in a way to gather strength in the community and increase the bond to each other. 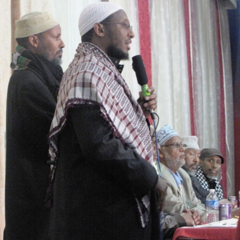 On April 27, 2012 the community gathered for an event called Family Night at the New Wholly gathering hall. Many community members turned out and filled the hall with the help of Hope Academy located West Seattle and Al Noor Mosque on MLK Jr. Way S which has the largest congregations of all Mosques in South Seattle. Photographs and videos were taken during the event, and 4 restaurants provided different testes of African and Arabian culture. One of the Imams of Masjid Al Noor addressed the crowd and explained the report and how we fared as a community. During his speech, members of the community were paying so much attention as he touched one by one all measures of the survey. It was shock to many people to hear that the community fared the lowest on every area in the survey.

After the reading of the report questions and answers were opened and small groups were formed so the community can discuss while meals served during that time. It was in between laugh and sadness or disbelieve of why the community fare low grade on such matters. They discussed how those numbers could be increased if such survey ever happen again.
Many have suggested the survey was not relevant to the Somali or Muslim culture. Others have thought that what is going on back home impacted their behavior and feelings. Some said the economic downturn and the high unemployment among the Somalis which is estimated 50% is also a factor for the low scores.

After all the evaluations the community talked about how to increase the community well-being. Some suggested if we should act more like Americans to beat them in the next survey. Some others said no, and argued it does not matter since the test is different and acting will never make things better, but it is better to protect your own ways and culture.  It was an eye opening for all. The community is now talking about how to educate the members for a better life, greater well-being and happiness.

These survey results are the averages for 44 individuals from the Oromo Community.  They are not a representative sample; so do not scientifically represent the community.  They may indicate the true feelings about Oromo people in the community, however. It is up to the community to determine if a project as per our agreement should be undertaken.

The Oromo Community Center held a town meeting for their neighbors. The people who attended the community meeting were the adults and teenagers of the community. The board of directors was also there.  People who participated in the survey were very surprised at the scores. Not only did they score extremely low on every part of the test, but they got the lowest of all the communities in many of the categories. When the project started, they were sure that the would of have had a higher score, but to their surprise and dismay, the results proved us wrong.

Some quotes from community members:
·       “We really need to change”-Khalid Mohamed
·       “Are you serious?”-Fuad Mohamed
·       “You have got to be kidding me” – Sumaya Mohamed
·
When asked what they should do increase well-being, the replied with the following:
·       “ We need the youth to participate more, we can do this by having video games and maybe a hoop at the center”- Kimo Sani
·       “We need the community to form a greater bond, we can accomplish this by having more community events like have lunches and dinners and sleepovers. It shouldn’t be too hard to put these events together.”
·       “The children do not participate in community events as much as olds, because the events are considered ‘boring’ by kids, so we should have some events that the kids would enjoy”

There were many other suggestions such as video game tournaments, picking up garbage around the neighborhood and having classes at the center.

The community members had a very long discussion on what they should do. They took into consideration what everyone had to say, and decided to do something that would benefit the environment, the youth, and the community. There were many suggestions that fit these categories such as having a recycling drive, a food drive, and a gaming tournament.

Some pictures from the first activity: 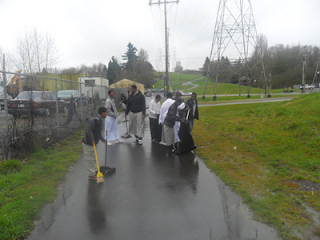 Cleaning up garbage in the rain. 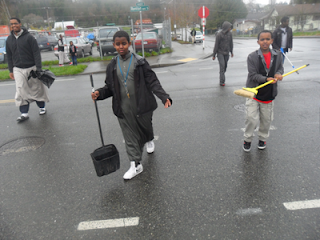 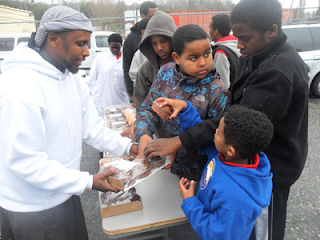 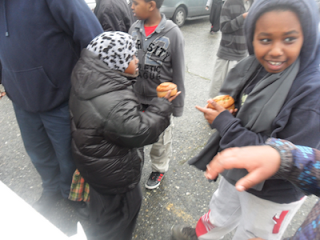 Everybody is having fun. 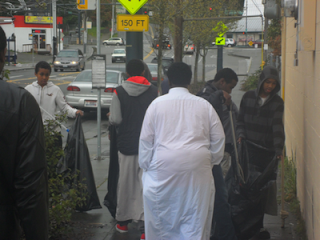 It was a good day.

Filipino Community of Seattle: The well-being of elders

These survey results are the averages for 45 elders from the Filipino Community.
They are not a representative sample; so do not scientifically represent the community.  They may indicate the true feelings about the elders in the community, however. It is up to the community to determine if a project as per our agreement should be undertaken.

Scientific findings indicate people’s happiness is lowest in the middle-ages (45-50) then rises as one gets older.  World Happiness Report, Layard and Helliwell, Cambridge. Yet the elders in the Filipino community scored lower than the average American.  The Filipino community center held a town meeting. Fifteen elders and other community leaders attended.  They discussed why Filipinos scored lower than the average of the American. It was not much of a surprise to anyone and some had mixed feeling about it. Some been living here for a long time and others are newly immigrants.   The meeting and discussion was conducted in Tagalog to ensure that everyone could participate and understand the reason and the importance of the outcome of the project. The community meeting was held on March 31, 2012. 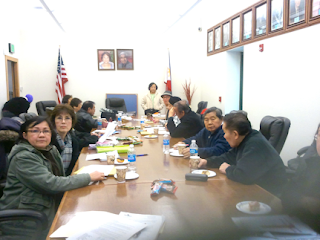 One comment from the meeting was “Life back home are different, we don’t have a lot of stress, because everybody know everyone including your neighbors and have trust them even when you leave your house you feel safe and they will watch your kids and house until you came back. Here in the United States are different, most of the time we don’t know who our neighbors are, and the fear of knowing them because of the attitude they have towards immigrants(which some of us had a bad experienced, because of our accents, how we talk)”

The community talked about what they personally could do in their own lives to be happier. Some of their answers were:

They discuss and decide on a project to enhance community wellbeing. They decided to focus on public safety. They decided to have a community forum to create and understand how to start Neighborhood Watch that would include education on how to get involve and bring other people to the forum. The group decided that they would have a community forum on public safety and will invite the law enforcement, crime prevention council and others to present to the community information about public safety such as burglary, robbery, safety, ID theft and hate crimes. 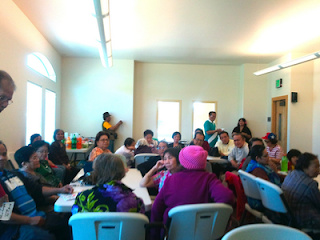 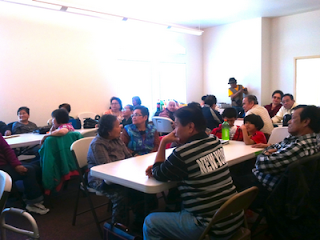 The community discusses tough issues.
Posted by Happiness Alliance at 11:30 AM