I have never enjoyed politics. I see politics as a long sporting match where neither team can score without being called on a technicality. When a winner finally emerges from the rat race, you come to realize all of your favorite players have been traded. 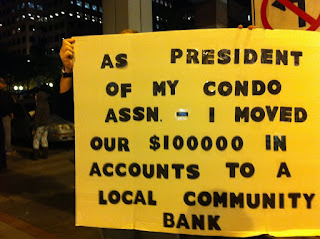 Plainly put, politics are boring, however change is exciting!

This may be one reason why many individuals find their way into politics at a time after we suffer a large and often painstaking shock to our system or when individuals collectively challenge the existing system.

We are in in mix of both of these things today. The movement- Occupy Wall St- that began in Manhattan over month ago spread to Seattle October 1st. Shortly after the ‘occupation’ began, I started to attend the general assembly sessions and regularly spent my evenings in Westlake plaza-where the occupation has been occurring.

After several nights of sleeping in the park and nearly two weeks of spending my evenings and eating my dinners in the park I reflect on the experience and opportunity I have been provided.

Why was I compelled to join this movement? For what reason am I participating?

The answers to these questions emerged quickly. Our system is broken. It does not take an economist or academic to realize that our system has been disrupted and no longer serves those whom it represents. Simply put, we want a system that works for all us; a system with greater economic equality; a system that holds people -including the people upheld through Citizens United (corporations)- accountable for their actions.

Please keep in mind that I am an optimist. I approach this movement with the idea, “democracy only works if people get involved”. That is what I believe this movement is about. It is about reinvigorating the greater portion of our society. Our moral has been squandered, our believes are hijacked, and this movement exists to demand, as a collective, we take these back and bring attention to our discontent.

The movement represents community. I have become a member of the greatest community I have found since leaving the suburban oasis, of which I am still

recovering from, 6 years ago. Since becoming a member of this community I have been given the opportunity to learn, to reflect, and converse, with individuals who lie all over the spectrum. Many of these individuals would probably never found their way into my live without joining this movement.

The movement represents education. As I previously stated, I have ever been interested in politics. Now I find my social life revolving around politics, my spare time exists to read further into proposed legislation, past and present, and researching the thought leaders and academics I learned about juts hours earlier.

The movement represents economic justice. Turn on and tune in to any of the movements through the county and you are bound to hear, ‘we are the 99%’ which references the largest income gap we have scene since 1928.

This movement provides motivation for those searching for change. This movement exists to include those who have felt alienated, and dissipated within our society. I continue to occupy to show my support of those less fortunate. Realizing I have been privileged, I still suffer from the failing economy, increasing unemployment rate, furthering gap between the rich and the poor, corporate domination, and the involvement of big money in politics.

More than anything else, this movement represents self grow. I have learned about myself, my political ideologies, and have become actively involved in a movement aimed at creating a society with greater equality. Just as everyone, I have formed my own ideas on what will assist us in getting there, however will leave this for another time.

I realize the movement has flaws, and I write this leaving all of my frustrations with the movement aside. I encourage others to think critically about where we are headed as a nation, a word, and as a species. The media coverage will not suffice the education of this movement. I call on you to become a part a something much bigger than yourself!

Posted by Happiness Alliance at 3:32 PM