This past week, at the Dialogue for Global Happiness in Dubai, Bambang Brojonegoro, the Minister of National Development Planning of Indonesia, presented  his nation's recipe for happiness. It is an approach  that will likely be quickly followed by other countries. 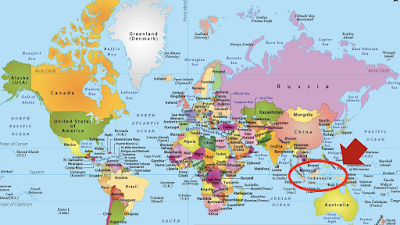 Indonesia's happiness ranking is pretty low. Out of 155 countries, its happiness ranking is 81, with one being the highest (Norway).  According to this happiness ranking, happiness is determined by six factors: Gross Domestic Product per capita (average income), social support (having someone to count on in times of need, generosity (donating but not volunteering), healthy life expectancy, perceptions of corruption in the government, and freedom to make life choices. In Indonesia, income, social support and generosity are the largest contributors to happiness, while perception of corruption does not figure for Indonesia's the rankings in 2017. 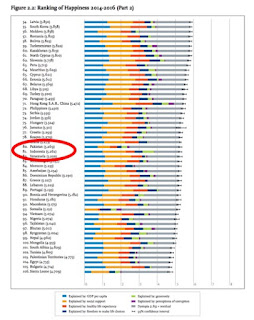 But what does this mean in terms of practical application at the governmental level. In the words of Bambang Brojonegoro, what to do? 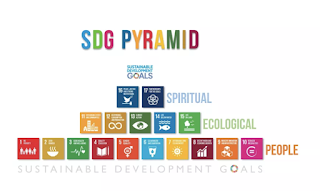 The pathway seems obvious for remedying a nation of people in poverty: economic development. But developing an economy aligned with the SDG goals that brings about the happiness and well-being of its people is not that obvious, as the economic development of many of the richest countries in the world well demonstrates (except maybe Norway...).   Bambang Brojonegoror spoke of goals within the framework of economic development: employment, household income and self development through education and skill training. He also talked about realizing these goals through programs and policies aimed at increasing the happiness and well-being levels of his nation's people. "Happiness will bring economic growth ultimately" he said. He seems to have things backwards from the accepted point of view. Genius.  It's a formula the rest of the world would do well to consider.

The measurement his government is using instead of GDP is a happiness index. Now, there are many happiness indices, from our own, the Happiness Alliance's Happiness Index, to Gallup's World Poll, the OECD Better Life Index, and many others.  But the Indonesian Planning Department decided to create their own. Maybe because they score so low on other indices, or maybe because the data would be more useful for their purposes, or maybe a combination of these and other factors, they have created what they call the Indonesia Happiness Index.

The Indonesia Happiness Index is composed of three parts: Life Satisfaction, Affect (feelings), and Eudaimonia (Meaning in life). This composition is aligned with the OECD Guidelines for Measuring Subjective Well-being. In the life satisfaction dimension "personal relationship satisfaction and social relationship satisfaction" are measured.  In the feeling dimension, "unworried feeling, happy feeling and un-depressed feeling" are measured. In the meaning of life dimension, "interdependency, self-acceptance, development and positive relation with other people" are measured.

The data will be used "so people's well-being...is the center of development" said Bambang Brojonegoro.  Plans at the Department of Planning are to first focus on what people value the most in Indonesia: ways of strengthening families. This approach of focusing on strengths to address areas of weakness is considered to be the pathway for economic growth in the long run. Again, genius.

Bambang Brojonegoro ended his talk at the Dialogue for Global Happiness with a quote to explain the effect this approach has had on civil servants in the department of National Development Planning of Indonesia:

"Nothing makes us happier more than making others happy around us."
Posted by Happiness Alliance at 1:01 PM 1 comment:

Unhappy? You are not alone

The Gross National Happiness Scores for 2017 are here and the news is not good. At first we were suspicious of the low scores: maybe most of the people who took the survey were unhappy because of the current political situation  We decided to test our data. It turns out that we are not the only ones finding that people's happiness in 2017 took a dip. Gallup, a consultancy group that randomly polls, corroborates our findings, but also affirmed our suspicions: people who do not feel aligned with the current regime in the U.S. White House are suffering. 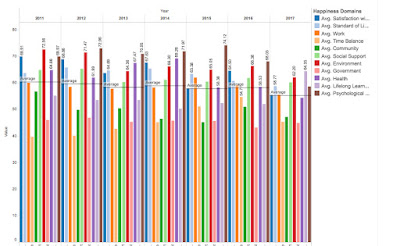 Who is taking the Happiness Index Survey?

About 900 people a month take the Happiness Index survey. A little over half are women. The majority are between 25-65 years of age. Over 95% are from the U.S.A. although groups of people in Beirut, Kuwait, Japan, and Canada used our survey in 2017.  Many educators also use it.  (Anyone can, by signing up. It is all free).

That said, most of the people who took the survey learned about it from a google ad, as we are the recipient of a grant from google. Our plan for 2018 is to expand our reach to include people we had not reached before.

We will have more information about who took the survey and how happy (or unhappy) they are throughout the year. 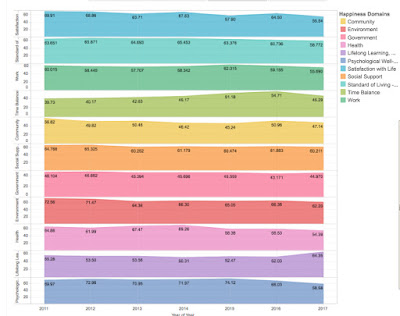 The bad news: where it hurts the most.

The bad news about our happiness scores is that we are unhappy where it hurts the most: our psychological well-being and our satisfaction with life.  Psychological well-being is measured with a flourishing index that includes questions about purpose, optimism, and positivity. Satisfaction with life gets at the question: are you are living a life that is right for you.  Historically, Americans score high in these areas even when they score low in the other domains of happiness.

This is concerning, because when we are hurting psychologically, there are impacts on our health, families, engagement in community,  job performance, and other aspects of our happiness and well-being.

There is a strong message right now coming from the field of positive psychology that your psychological health is in large part under your control. The message goes something like this:  "If you practice mindfulness, gratitude and generosity on a regular basis, you will be happier. If you don't, it's your own fault you are not happy."

We at the Happiness Alliance say that while you do have a choice about how you feel, it is only to a certain extent. The conditions of your life, also called the domains of happiness, have a big impact - particularly big when they are depleting instead of supporting your psychological well-being and satisfaction with life. So while it is good to develop your happiness skills, it is also crucial to do what you can to bring about the exterior circumstances that support your well-being. Having conversations about life's circumstances and the implications on your happiness and the well-being of others is the first step towards changing those conditions that are causing you to hurt. Then comes activism.  You can use our happiness index to spur these conversations and inspire action.  You can use our policy tools for taking action in your community for system change.

One area that our scores have increased is in lifelong learning. This is great news because it means we are engaging in ways that are increasing our capacity for taking action.


Learning is something we do throughout our lives. We learn on many different platforms.  Ken Wilber called them "modes of development."  They are kinesthetic, strategic, emotional, interpersonal, intrapersonal, social and cultural, intellectual, artistics, moral, and spiritual.

More about our happiness scores in our next newsletter

We will send you more information about our happiness scores in our next newsletters.  And...we welcome collaboration. If you are interested in joining our team or using our data for your research, email us at info@happycounts.org.

And you can always use our index for free - because we believe strongly that to see the change you have to be the change, and so our index for a paradigm shift in our economy, society and government will always be free.

Posted by Happiness Alliance at 10:38 PM No comments: