On Happiness and Sustainable Development - by Pete


Last year, The Happiness Initiative started working with Pete (Chirapon) Wanwongwiroj. He is a wonderful, amazing and delightful person. We worked together to launch a happiness index project at University of Michigan, were filmed for a student project at Bioneers, and strategized for the project. Here is a paper by Pete that explores the issues of Happiness and Sustainability. Thank you Pete!
Laura Musikanski, ED of HI

Happiness: A Path towards Sustainable Development?
Chirapon Wangwongwiroj
University of Michigan
Please do not reprint without permission of Pete - chirapon@umich.edu
Author Note

[1] The Easterlin Paradox is not without controversy. It has been hotly debated in the past decade, but Easterlin’s latest study in 2010 confirmed his original conclusion.
Posted by Happiness Alliance at 5:56 PM 5 comments:

In a Space Shuttle

The space shuttle landed in Los Angeles a while back. It was part of an exhibit at the museum. The plan was to cut down hundreds of trees to transport it to the museum.  Each tree would be replaced with two, and two years of maintenance would be given for the saplings. One community had planted 200 of the trees targeted. Those 200 trees had been stewarded for 10 years by people. The trees were adopted, the stewards had planted parts of themselves with the trees. 10 years.  That community, with the help of TreePeople, an NGO in LA saved their trees. Other communities did not. But they did manage to argue with the museum that the neighborhoods most tree-starved suffered from social injustice more than other neighborhoods- obesity, diabetes and lung disease. They showed direct correlations. The museums responded by planting 4 trees to each tree cut down and 5 years of stewardship.  Read more here.

It's a success story.

I am in San Rafael at the Bioneers “Catalyzing a Resilient Community Network” one day pre-conference workshop. Kenny Ausubel, the founder of Bioneers,  kicked off the day by stating he wanted this workshop to happen to connect the dots. So many people doing similar work that al fit together, but not enough partnership, collaboration and cooperation.  Not enough shared learning, expansion and scaling.

The first part of the day is lessons. Two of them:

From Steve Weddell on The Power of Global Action Networks, the ingredients for radical change: a) Natural System Stewardship – from the individual to the ecosystem and community, b) Embedded Action Learning – or participatory action research and other grassroots activism, c) Support Transformational Change – create and facilitate cycles to re-imagine the future, d) Cultivate Systems Intelligence – connect the dots, e) Connect Hierarchies and networks and f) Develop through fractals – think global act local.
Steve also talked about the current system with increasing population, demands for happiness (quality of life), interdependence and declining natural resources met by climate change, social injustice, water scarcity and food system breakdowns.  He called on the need for expanding our ability to solve large scale problems. 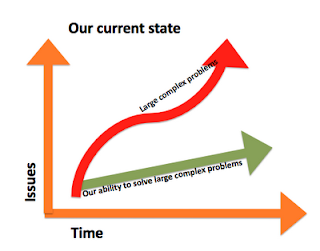 He feels the solution lies in relationships & clarity, inclusion & collaboration and resilience & equity.

From Scott Spann on The Power of Global Action Networks on what makes for large scale change by an organization, or “the mental model” for organizations making change. They are 1) large (think collaboratories), 2) multi-hub, 3) work for large system change, 4) composed of voluntary leadership and 5) multi-stakeholder.

Soon lunch starts, and then the workshops.  The cup is full after 5 hours of 10 speakers. It is time for action.

Posted by Happiness Alliance at 3:23 PM No comments: