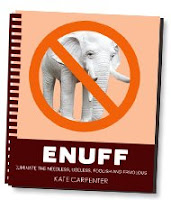 In our lifetime we have seen the simplicity movement grow concurrently alongside the general population’s acquisition of stuff. With more gadgets available than ever before, the argument for simplicity is as strong as ever and stresses that, rather than accumulating material possessions in an attempt to gain fulfillment, we need instead to make room in life for experiences and relationships. At first glance, ENUFF: Eliminate the Needless, Useless, Foolish and Frivolous, by Kate Carpenter seems like it will make just that argument. In actuality, The Needless, Useless, Foolish and Frivolous which Carpenter refers to touches on the material just the right amount, leaving plenty of pages to focus on the mental and emotional as well.

ENUFF is constructed of 12 chapters that all concisely, but effectively make the case for eliminating –as Carpenter puts it- the Needless, Useless, Foolish and Frivolous in our lives. This is no impossible task. We all know that we could afford to eliminate, “the need to impress others”, “lack of focus” or “metal clutter,” and Carpenter isn’t the first to make these arguments. She does, however, manage to make the argument for eliminating these 12 “white elephants”, (burdensome possessions whose costs are out of proportion of its upkeep) in just 75 digestible pages.

The format can be at first a bit jarring as ENUFF doesn’t read like a traditional text. Each chapter contains a few short subsections in which Carpenter calls upon experiences we can all relate to, as well as her own, to make the case for de-cluttering our lives. In addition, she quotes and uses excerpts from other authors (including Sustainable Seattle founders Vicki Robin and Alan Atkisson), and provides suggested further reading. Some chapters even include film suggestions. Once the brain and eyes get accustomed to the format it is effective and invites the reader open up and start in whatever chapter may be most relevant.

What ultimately makes ENUFF a success is the constant, “oh yeah” the reader finds him or herself repeating paired with simple –although often frustratingly difficult- actions and suggestions for getting away from the “stuff” that isn’t working in our lives. While change is tough, each chapter is convincing, especially when the reader connects how intertwined the physical mental and emotional clutter is.

ENUFF encourages you be who you are and live the life right for you by removing everything else that gets in the way. If you are up for that challenge, ENUFF will support and coach you through it. If you aren’t sure, ENUFF may put you over the tipping point.

ENUFF by Kate Carpenter is available at enuffstuff.info

Posted by Happiness Alliance at 3:39 PM No comments: